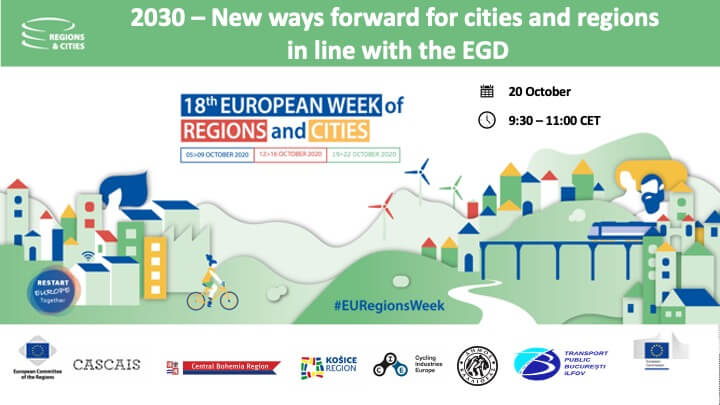 It aims to explain and demonstrate how cities, regions and associations can positively contribute to the objectives enshrined in the European Green Deal (EGD) and how they can help to achieve the goals of energy transition and to help the European Union becoming the first carbon neutral continent by 2050. In addition – and in line with the EGD – it seeks to highlight the crucial role that “cities of the future” will play. These are sustainable cities, connected and optimised thanks to the use of technology. Moreover, they are a key solution to contain and reduce the alarming environmental and socioeconomic repercussions that urbanisation will cause on our planet.

The debate will focus on specific contributions for the success of the European Green Deal. Good examples such as Energy Strategies, Carbon Neutral roadmaps, investment in “green technologies”, bikes for transport and logistics, or free public transportation will be debated. In addition, regarding the transport sector, the session will approach some technical issues such as challenges with integrated ticketing and tariff policies, as well as contracting of public service obligations for regional services, institutional, investment and intermodal transport coordination. In the cycling contribution the success of cycling as a post-COVID-19 recovery intervention and a progression towards the European Green Deal will be explored. The aim is also to find solutions for the current challenges facing EU urban communities and, therefore, the Central Bohemian Region will present a project designed as an entire resilient urban system containing elements of a highly innovative and resilient city – from vertical urban farms to drone transport of goods, monorail and protection against blackouts, with well-balanced work and leisure areas.

Finally, the need to involve cities, regions and other stakeholders such as associations at all stages in the implementation of the European Green Deal and Recovery Plan will be discussed.